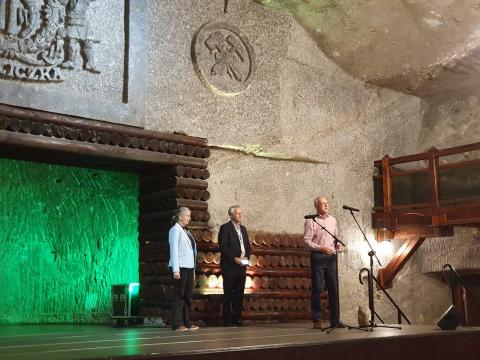 The EAPR Council has awarded two honorary memberships to celebrate people with outstanding achievements in potato research and significant contributions to the association. New honorary members were announced on 7th of July 2022, during the conference dinner of 21st Triennial Conference of EAPR in Wieliczka Salt Mine, Poland.

Dr Mike Storey has been an outstanding contributor to research and innovation in the potato industry, globally, but with a strong emphasis on the British potato industry. His achievements in driving research and innovation in the British potato industry have been recognized through many different awards, the most recent one being the John Green Memorial Trophy. This award is a clear demonstration of the extent to which he has developed his knowledge of the potato crop, his skills in knowledge transfer and in translation of applied potato science to practice, and his impact on the entire potato sector.

For many decades Dr Storey has served the EAPR in many different roles. Dr Storey has been processing editor and language corrector for Potato Research for more years than any other serving member of the editorial board, for many decades. He is still acting as processing editor of Potato Research because of his broad and unique expertise. Moreover, Dr Storey has been the UK country representative of the EAPR for many years, the country with the largest number of EAPR members. Dr Storey also served on many scientific committees for Triennial conferences of the EAPR. He became vice president of the EAPR after Dr Douglas McRae retired from this position in 2002 and served the Association in this crucial position until 2017.  At the end of his service as vice president he supervised the transition to a new website.

Professor Kazimiera Zgórska focused her entire professional career to the potato. She started her research work at the Potato Institute in Jadwisin and continued it at the Plant Breeding and Acclimatization Institute-National Research Institute, Jadwisin Division, Poland. Professor Zgórska investigated, among others, the biological and technological factors that determine the physicochemical properties of potato tubers. She has been awarded with many prizes and distinctions for her activities.

Professor Kazimiera Zgórska was an active member of the EAPR from 1981, but already in 1978 she participated as a young scientist in the 7th Triennial EAPR Conference, which took place in Warsaw. In the years 2000-2005 she was a member of the Association's Board and Chair of the EAPR Post Harvest and Utilization Section. In 2005, she was a member of the Organizing Committee of the 15th EAPR conference in Hamburg. She ended her professional career by organizing the EAPR Post-Harvest Section Meeting in Warsaw in 2013.