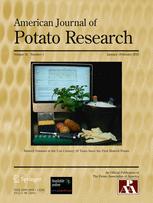 American Journal of Potato Research is the Official Journal of the Potato Association of America (PAA). The PAA was formed in 1913 by a handful of dedicated individuals from Maine, New York, Colorado and Washington D.C. Members are primarily from the United States, Canada, Mexico, and Latin America, but another 50 countries throughout the world are represented in the membership.